Funding a book cover: My experience with Kickstarter

As it relates to my latest book, I’m trying something very new to me: Crowdsourcing and (for a lack of a better term) Crowdcreating. This post is about the former. My next post will cover the latter. 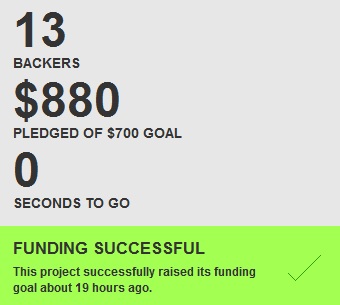 My situation is that I need help to cover the up-front costs of paying for an artist to design a cover for my latest book. So I signed up for Kickstarter, a crowdsourcing agency: You publicly post what you’re trying to accomplish, what rewards you’re willing to give depending on what people are willing to contribute, and other people pledge money to you. If you meet your goal, you get money. There are no “partial wins” – if you don’t get enough pledges to meet your goal, you get nothing and your contributors pay nothing, but you are free to try again.

What does Kickstarter cost?

At the time of this writing, Kickstarter takes 5% of the total contributed amount of winning campaigns, and then Amazon (the credit card and money processing agency) takes another 3%-5%. So, estimate 9% is cut off the top before you get any money. In my case above, my campaign earned $880. I’ll actually get about $800.

What did I learn about Kickstarter?

Instead of signing up for Kickstarter and having to pay their fees, couldn’t I instead just ASK people for money and give them various rewards? Sure, I could do that, but that’s a low-volume, non-automated method.

If you want to take a loan from a friend or family member, by all means, go for it. But if your intent is to raise a lot of money or reach a lot of people, you may want assistance from a proper tool like Kickstarter.

Kickstarter is powerful: Kickstarter gives a creator access to a massive number of potential pledges, arguably far beyond what they could generate on their own, allows the creator to easily track everything related to the project, allows pledges to maintain and change their accounts without bothering the creator, allows the creator to contact contributors via subset or en masse, and it has a built-in payment and accounting system. It’s cool.

The money does not magically appear: Your project may not be as profitable as what’s displayed in the Kickstarter promotional material. Yes, as you browse through the Kickstarter site, there are many cool projects out there. Many have raised amazing amounts of money. Many have succeeded.

My own project is not one of these. It would’ve failed without an unexpected boost from one of my family members. With two days remaining on my campaign, I was barely over halfway to my $700 goal.

If and when I do this again, I know what I need to do differently for next time:

Have a video introduction: Kickstarter’s instructions even tell you to do this. You should have a video because it’s more personal, helps generate more goodwill, and (hopefully) makes your project appear more professional. I did not do a video, thinking that something as straightforward and simple as a book cover didn’t warrant one. I was wrong.

I didn’t have a video intro for my project. Next time, I definitely will.

Have a big fan base: I currently have about one thousand people in contact lists, and I run nine websites. It’s not enough. In terms of generating interest for a Kickstarter project, it’s abysmal.

My results were great, if you only counted my friends and family. As for fans or people who didn’t know me personally? I only had four (yes: one, two, three, FOUR) non-friends-or-family contributing to my campaign, and it’s those strangers that will really make the difference between success and failure. Otherwise, yes: You’re better off asking for a loan from a family member.

I need to have an exponentially larger fan base before I can expect to pull significant Kickstarter pledges.

I know that I’m lucky to have had my Kickstarter project complete successfully. My next attempt will see my results bolstered by new information, more fans and better technique.

Of course, that’s all for later. Now that I have the money, I’m very eager to take the next step: Let’s get an artist for this book cover!