“Hacking the Naked Princess” – A self-publishing experiment with 2600 magazine 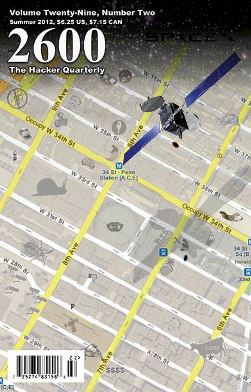 I emailed 2600 magazine, and asked if they’d be interested in serializing the next Dev Manny book. They said okay, they’d at least be willing to try out a couple chapters. So, here we are: Go get 2600 Volume 29, #2 (the Summer 2012 issue), and read the start of Dev’s newest case, “Hacking the Naked Princess”.

As the 2600 editors said at the end of my story, this is a test: “Please let us know if you want to see more – or if you want us to stop. Write to letters@2600.com.” If the 2600 community doesn’t like the story, I’ll bow to the majority and Dev will walk alone. Otherwise, here’s hoping we can publish more with 2600. My thanks to the 2600 editors for taking the chance!

So why did I do this? The serialization concept sounds fine on paper (electronic or pulp), but it’s not used as much these days. It’s a concept that seems to have been more popular in the days of Heinlein and Asimov than in 2012.

My decision to try publishing with 2600 was based on three ideas. First, I think the 2600 audience would be specifically interested in Dev. The first two chapters are the intro to the Dev Manny world, but later aspects of the story involve both a hacker community and the hacker mindset. Second, I wanted to see if a highly technical magazine would be interested in “geek fiction”. Just look at the article names surrounding the Dev Manny story, and you’ll get a feel for the quality and skillsets of 2600 writers and readers:

Third, thanks to 2600’s excellent copyright and content ownership policy, I can publish with them, and later can still use my work in other formats. In this case, I can serialize the book and then can later self-publish it.

This is a cool experiment with people I respect, and I am eager to see what happens next.